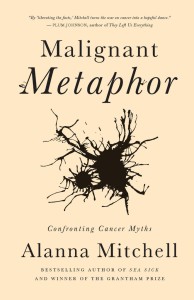 I have cancer, and I loved Malignant Metaphor. I loved Mitchell’s objectivity and honesty. I love those who can plow through reams of science and pull it together in a way that pokes holes in some of the unproductive myths we assume to be absolute truth. And I especially love it when that research yields a perspective that is in the end calming and encouraging rather than alarming.

I loved that she respectfully discusses our fear of cancer. She reminds us that it is our nature to construct a narrative when we’re afraid. “Random is not emotionally satisfying,” she writes. So we look for causes, cures, and metaphors that comfort us. We construct myths, both helpful and otherwise.

In a short history of fear, Mitchell outlines some of the major terror-inducing illnesses of our past. The Black Death. Leprosy. The Spanish Flu. Tuberculosis. TB, responsible for a quarter of all European deaths in the 19th century, was seen as evidence of moral weakness, of lack of ambition, of being an overly sensitive romantic. How’s that for an unhelpful myth?

And now, cancer. If you get cancer, you’ve got faulty genes. Or have had a bad lifestyle. Or have the wrong attitude, or the wrong personality.

The genetic link, it turns out, is a small one, responsible for perhaps two or three percent of cancer cases, she says. And with some obvious exceptions, lifestyle correlation has been inflated also, and doesn’t hold up to scrutiny. In addition, the idea that we can prevent cancer yields feelings of shame and guilt when we fail. Did I eat too much meat? Too much sugar? Did I sleep too little, exercise too little, work too much, drink too much? Not likely significant factors, says Mitchell. Did I allow myself to feel too much stress and anxiety? Suppress too much emotion? Allow too much negative thought? Again, no. The findings of a meta-analysis on personally types found no higher risk in those characterized by the suppression of emotion, pessimism, depression, and timidity.

The commonly used war metaphor falls shorts too, in Mitchell’s eyes. War is violent, implies a death toll, and is guilt-inducing. If I lose the war, was I weak? A poor fighter? Guilty of choosing the wrong course of action? “I think the brutality of the cancer metaphor saps our society of some of its productive vigor,” she writes. “Guilt and blame and fear are paralytic emotions, a black hole for energy.”

It may be a counterproductive and malignant metaphor, but we’ve come by it honestly enough. The battle with cancer clearly can be a matter of life and death, and the origins of chemotherapy itself lie in the use of chemical weapons—the original team of cancer drug researchers at Sloan-Kettering literally originated in the US government’s Chemical Warfare Service after World War II.

And though treatments and management of side effects have improved with time, and researchers now often look to the plant world for treatments, it can still feel very much like a war. Taxol, the drug which comes from the bark of the yew tree and which saved my life five years ago, nearly took it earlier this year. It is a potent therapy, and wears the label of weapon well.

As much as all this is true, I too am looking for a better metaphor. Some of us live with cancer for many years, much as others live with diabetes or high cholesterol or other chronic disease. I sometimes view it as more of a boxing match, one in which I occasionally get beat up, but also patched up again, and in which a defeat doesn’t need to spell death.

As to looking for fault, I’ve quit. The reality is that with a few exceptions, cancer is random. We have a long history of making up stories in the face of fear and poorly understood phenomena, stories that comfort and calm us, and that may or may not carry an element of truth. And the reality is that it has always been easier to hold victims responsible than to take responsibility as a society, which in this case would demand research on larger environmental causes that call into question an entire system of production and manufacturing.

Mitchell is a science writer, and it shows. She confirms my own inclination to take fund-raising messages with a generous shake of salt. Cancer is not, she says, when you adjust numbers for age and population growth, more prevalent than ever. And though it can still be deadly, survival rates for most cancers have increased.

Cancer is not happy news, no, but there is reason for optimism. We have a long history of facing challenges like this productively, and every reason to embrace life and health enthusiastically even in the face of current cancer realities.